← Installing vCenter Server does not complete with Windows Server 2008
The Quick and Dirty (and Free!) IP Scanner →

During another virtualization implementation at a customer’s site, I had the opportunity to upgrade Nexus 5020 switches. We upgraded from 5.0(2)N2(1) to 5.0(3)N2(1). The process was surprisingly simple. The steps include

1. Setting up an TFTP server
2. Uploading both the NX-OS binary and the kickstart binary
3. Installing the binaries

We upgraded the Nexus’ from laptops while consoled into each box. We ran a TFTP server from the laptop to make things easy. As always, we used tftpd32.exe, which can be downloaded here. We created a folder on the desktop called TFTP and placed each binary inside this folder.

Running the tftpd32.exe executable, we changed the working directory to the desktop TFTP folder.

Console into the Nexus

We consoled into the Nexus with the standard serial settings
Speed (baud): 9600
Data bits: 8
Stop bits: 1
Parity: None
Flow control: None

Once we consoled in, we ran the following copy command to upload each binary. Of course, it doesn’t really matter in which order you upload them, simply change the file name you’re uploading.

When prompted to enter a vrf, we didn’t accept the default vrf, instead typing in management.
We entered the IP address of the TFTP server – the laptop from which we were working.
Hitting enter, we could see the upload progress with a handy little hash mark progress bar.

To verify successful uploads, we performed a dir bootflash: command to list the directory contents of bootflash, noting the correct file sizes on the far left next to the file names.

Once each file is uploaded, we installed them.

The installation is actually very simple. One command will install both binaries and reload NX-OS automatically to finalize the upgrade. The command is

The form of the command is 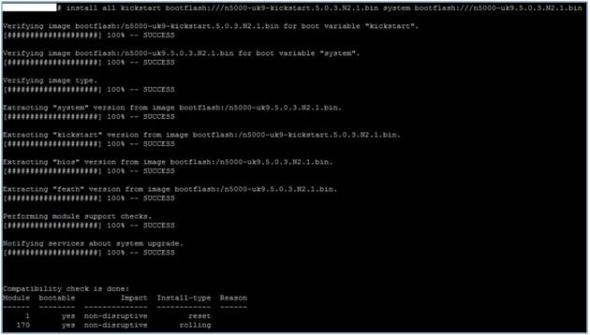 The upgrade process will keep you informed throughout the process, spilling status messages and progress bars to the console. When it’s finished, it will tell you the install has been successful, as seen below.

We did another reload after the upgrade to get a warm fuzzy that everything was operational. Running the show version command showed us the upgrade was indeed successful, listing the latest kickstart and system versions.

The show version command also told us the reason for the last reset: due to upgrade, and the version from which we upgraded.