Part I – How to setup Thinstation 5.3 thin client for use with VMware Horizon View 5

Part III – How to add drivers to your Thinstation build

Part IV – How to configure Thinstation and Google Chrome for a true, thin client experience

So if you’ve been following since Part I, you now have a DevStation stood up.  You’re now ready to build images that your thin clients can boot from.  I didn’t mention it in the first post, but be sure you’ve configured a static IP address on your DevStation.  You can do this via the Network Manager GUI interface.  Just right-click the network icon in the system tray and select Edit Connections…

This is the IP address you’ll configure on your DHCP server as Option 66, the Boot Server Host Name.  My DHCP configuration is shown here.  It’s important to realize that Option 67, the Bootfile Name, is relative to the root of the TFTP directory.  In the case of the DevStation and PXE booting, it needs to be configured as shown here.  The root TFTP directory can be found as a symlink in /var/lib/tftpboot which points to /thinstation/build/boot-images/pxe

So the full path to pxelinux.0 is /thinstation/build/boot-images/pxe/boot/pxelinux/pxelinux.0

Here’s a final note about setup before we get going: make sure you have a DHCP scope configured for your thin clients.  Common sense, right? It took me longer than I care to admit because I had placed my thin client in a different subnet than the scopes I had configured.  Obviously, once I added a scope for this subnet, my thin client started pulling an IP address.

END_OF_DOCUMENT_TOKEN_TO_BE_REPLACED

How to setup Thinstation 5.3 thin client for use with VMware Horizon View 5 – Part I

Part I – How to setup Thinstation 5.3 thin client for use with VMware Horizon View 5

Part III – How to add drivers to your Thinstation build

Part IV – How to configure Thinstation and Google Chrome for a true, thin client experience

Towards the end of my studying for the VCP5-Desktop exam, I decided to look into using some old  laptops and PCs I had lying around as thin clients.  Searching the web, I ended up settling on and wresting with Thinstation for a couple days.  As one of the few, free, thin client options, Thinstation is probably the most stable and most up to date software available.  This post shares the efforts I put into getting it running in my home lab.

You can follow Thinstation documentation in the same way that one can simply walk into Mordor.”

My end state goal is to touch the thin client as little as possible before working from a View desktop.  So my vision, then, is to PXE boot the end point, let it download the thin client OS, and have it auto-launch a View desktop client.  From there, a user could enter credentials and log in.

There are a few ways to get Thinstation working in a PXE boot environment.  The overall idea, no matter how you go about it, is that you have to use a development station to build the thin client boot image that will be downloaded to your thin client hardware via a PXE boot infrastructure.  There are no good materials on the intertubes to follow in a step-by-step fashion for this setup, so here’s my attempt at the first such walkthrough, as far as I can tell. 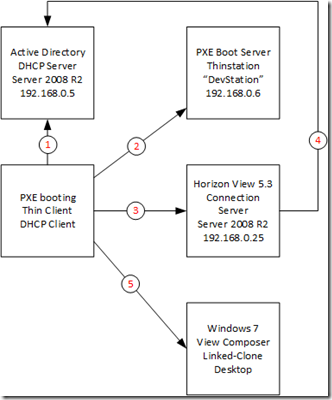 END_OF_DOCUMENT_TOKEN_TO_BE_REPLACED

After implementing Cisco Nexus 5ks that include native Fibre Channel switching for shops that usually don’t have dedicated SAN guys, I’m often called up sometime later to offer a refresher on how to add zones. I usually share this tidbit via email, but here it is for the internets. These commands are very similar on newer MDS models, as well.