I was performing my first upgrade past 2.2(3) this weekend (upgrading to 2.2(5)) and I came across a small change that took some googling to figure out. Eventually, I found the resolution in the Release Notes. If you’re performing a manual upgrade to 2.2(4b) or later, you have to clear the Startup Version of the Default Infrastructure Pack.  This action is the result of bug fix CSCus73964 and can be found in the Behavior Changes section of the 2.2 Release Notes.

The error occurred when trying to Activate the firmware of the IO Modules. It states, “Failed start activation. Manual upgrade/activation is disallowed because the Default Infrastructure Policy ‘Startup Version’ is set. Retry the operation after changing the version to ‘Not Set.'” 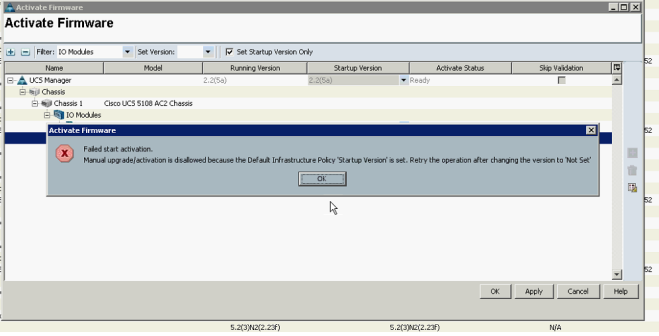 The UCSM GUI option to clear the startup version on the Auto Install tab was grayed out so I couldn’t clear it from there. The Firmware Management CLI Guide offered the CLI solution to clearing it, though, and it worked fine.

END_OF_DOCUMENT_TOKEN_TO_BE_REPLACED

Reading the release notes is always a good idea – but boring. But I perked up today when I was perusing the latest release notes for 2.2(5) for an upcoming implementation. Here are a few items I think are mentionable. Note that all these features were released in 2.2(4).

Clearly I didn’t deploy any UCS’s around the time that 2.2(4) was released because I totally missed this feature. In the distant IT past (pre 2.1 days), both the Infrastructure and Server firmware had to be at the same level to stay in support. Then came 2.1 which introduced backward compatibility with older Server firmware. Now you’re not necessarily forced to upgrade your blade firmware at the same time as your Infrastructure firmware. Nice. Now with 2.2(4) and Server Packs, blade firmware is backward compatible with Infrastructure firmware. Even better. Of course, this comes with caveats. That being that this feature starts at 2.2(4). So at this point, only 2.2(4) and 2.2(5) support such a configuration. But this is cool. Below is the latest mixed firmware version table from the release notes.
END_OF_DOCUMENT_TOKEN_TO_BE_REPLACED