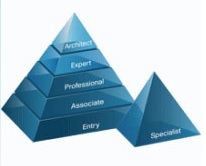 Working for a Cisco VAR, I recently had the opportunity to take the DCUCI exam to meet our Partner requirements. As noted in the title, I took version 5.0 of the exam. I thought I might take a moment and record my thoughts on the exam. As always, I have to stay within the limits set by Cisco’s non-disclosure agreement about test questions and content, but I hope to give someone an idea of what to expect and how best to prepare.

My background includes Cisco LAN and Data Center networking experience which includes implementing Nexus 5020/55xx/22xx hardware. I’m mainly a VMware server virtualization dude, as well, and the DCUCI does expect you to know VMware vSphere. I also have storage experience (mostly NetApp, but the vendor doesn’t matter for DCUCI). Along with 10GbE networking, I also have native Fibre Channel experience with Nexus and MDS switches.

I’ve been working with Cisco UCS now for about a year. I have implemented two green-field UCS B-series and worked with other clients that already had UCS in their environment. The green-field deployments proved to be very useful to get exposed. Each time, I was able to work with another engineer who was able to talk UCS with me, which was helpful if I had a question or had to troubleshoot connectivity. We also get C-Series servers in the shop on a pretty regular basis, so I’ve been able to get exposure to those, too. One item that needs to be mentioned is that when I’m working with the hardware, I almost always use the vendor documentation.

I also have a small FlexPod deployment at work that we use for demos and as a lab environment. It includes a single 5108 chassis with 4 blades, 2208 I/O modules, 6248 Fabric Interconnects connected upstream with 10GbE and 8 Gb FC to a Nexus 5548 and a 5596. I’ve written about the lab before here and here. I was able to upgrade the lab from 2.0-something to 2.1e, as well, which was very useful because the exam blueprint clearly states that the upgrade process is testable.

I also had a little exposure to the UCS Emulator but didn’t use it much (and don’t plan to) because of the hardware I have access to.

The hands-on experience was indispensable and I could not have passed the exam without it. I also tried implementing, but failed to complete, the entire VM-FEX configuration. I goofed up somewhere and never went back to fix it. Even this failure, though, proved very useful. It appears Cisco really wants you to know the ins and outs of VM-FEX.

And finally, I used Jason Nash’s (@TheJasonNash) Cisco UCS training videos from TrainSignal/PluralSight. After taking the test today, I can say that these videos lined up nearly perfectly with the questions I received on the test. Now, there are two parts to Jason’s videos – “Installing and Configuring” and “Managing and Troubleshooting” – essentially, many, many hours of training. If you can find the time, these videos are worth it. I’ve been in touch with Jason via Twitter and he says he’s planning on updating the series to the 5.0 version of the exam. The original recordings were in Q4 of 2011, if I’m not mistaken. But even for being 2 years old, they’re still quite relevant. One item left out of Jason’s videos were C-Series servers. Also, Jason didn’t hit VM-FEX nearly has hard as Cisco did.

So that’s not much about the actual test, though, I know. I think I can say the test was 70 questions and I had 90 minutes. Cisco’s usual array of questions was present, although the majority were multiple choice. If you haven’t taken a Cisco exam, check out their exam tutorial.

If you haven’t viewed the exam topics, get the most up-to-date here. Between experience and training, you can meet the objectives laid out by Cisco. Good luck! The 5.0 exam topics are listed below.