I had the opportunity recently to deploy 18 B420 M3 blades across two sites.  Having only deployed half width blades over the last two years, I had to change my usual Service Profile configuration for ESXi hosts to ensure the vNICs and vHBAs were properly spread across the two VICs installed in each blade.  Each B420 had a VIC 1240 and a VIC1280.  The Service Profile for the blades includes six vNICs and two vHBAs.  The six vNICs were used to take advantage of QoS policies at the UCS-level.  The six vNICs configured included:

END_OF_DOCUMENT_TOKEN_TO_BE_REPLACED

I wanted to take a short minute and document the addition of a few Cisco MDS 9124s to our test lab at work. The purpose of the addition in the test lab is just to show the functioning and capabilities of the devices to work together. See my previous post on configuring native FC over a Nexus 5548 and 5596. The FC-specific portions of the MDS config are very similar to the Nexus line. Here’s what the middle state looks like. I haven’t taken the time to move the NetApp FC links to the MDS switches yet (or the UCS FC links instead), but the port provisioning process will be similar to those already documented in this post and the Nexus post. The Visio of what’s configured is below followed by my MDS configuration notes. 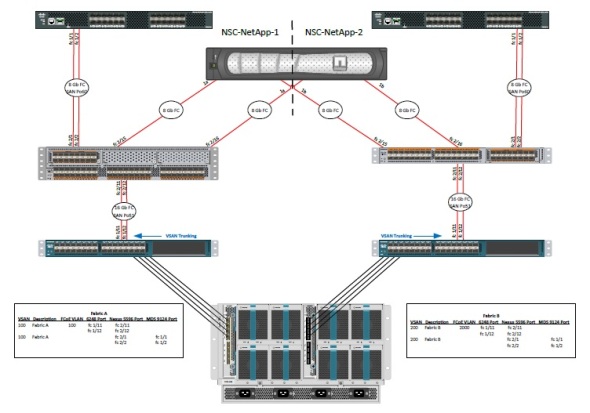 END_OF_DOCUMENT_TOKEN_TO_BE_REPLACED

So it’s been a long time since I’ve posted. We’ve finally finished our data center site surveys and we’re very close to starting the implementation phase. In preparation for implementation, we’ve begun testing configurations, playing with possibilities, and generally, seeing what the given hardware can do. We don’t exactly know what the architecture design team will give us to implement, but our pre-work will let us get a feel for the kinds of things we’ll be doing. For instance, we know we’ll be using virtual port channels and fabric extenders, so we’ve configured these on several of our Nexus switches. We’ll probably blow away the configs when we officially start anyways, but again, this gives us a chance to get our hands on the equipment and practice some of the same configs we’ll be using later.

Our test design will have two 5020s with 40 10GbE SFP ports plus a 6 port 10GbE SFP daughter card and two 2224 fabric extenders, FEXs, with 24 1GbEcopper ports. It will not be a cross connected FEX design because we will use servers with dual-homed 10GbE converged network adapters, CNAs, which we plan on cross connecting. Cisco does not support a design where the FEXs and the servers are both cross connected. Our test design looks the diagram below. Note that the diagram shows the server connected to each FEX via copper ports. We’ll actually be connecting each server via CNA twinax cables to the 10 Gb ports on the 5020s.